And the moral to that is...

So much for that pretentious rave about Candide/Voltaire. The refrain "You have been a fool and so have I" still applies - we had learned nothing until life imitated art! We just spent $1k plus to send our 14 yr old to a Department of Sport and Rec winter camp at which she lasted a mere 48 hours of the intended 7 days! Too depressing to relate the details here but the morals to be drawn from this experience are:
So, neither pure, nor wise, nor good, and $1K the poorer, we'll tend our home and prune our trees, we'll make our newly established veggie garden grow, we'll relish each others' company and that of our little furry charges and do the best we know. 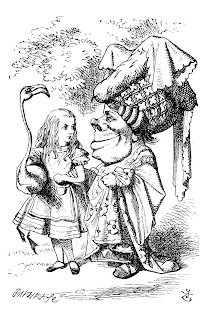 `Tut, tut, child!' said the Duchess. `Everything's got a moral, if only you can find it.' And she squeezed herself up closer to Alice's side as she spoke.

Alice did not much like keeping so close to her: first, because the Duchess was VERY ugly; and secondly, because she was exactly the right height to rest her chin upon Alice's shoulder, and it was an uncomfortably sharp chin. However, she did not like to be rude, so she bore it as well as she could.

`The game's going on rather better now,' she said, by way of keeping up the conversation a little.

`Somebody said,' Alice whispered, `that it's done by everybody minding their own business!'

`Ah, well! It means much the same thing,' said the Duchess, digging her sharp little chin into Alice's shoulder as she added, `and the moral of THAT is--"Take care of the sense, and the sounds will take care of themselves."'

`How fond she is of finding morals in things!' Alice thought to herself.
Chapter 9, Alice in Wonderland

Non sequiter: check out these wonderfully altered episodes of the classic anime series Yugioh. My son introduced me to them today. They are really funny!
Posted by Alice at 8:34 PM