An Associated Press story reproduced in yesterday’s Sydney Morning Herald (19 June 2009) states that Miriam Sakewitz was arrested in a hotel room in Oregon with more than a dozen rabbits, eight adults and half a dozen babies, ‘some caged, some roaming’.

The story went on to say that she had a history of consorting with bunnies and had been arrested in 2007 for living with more than 250 rabbits ‘in squalid conditions’. In a plea deal she was released but forbidden to have the animals for five years. She was arrested four months later when, unable to endure such privation, she stole back one of her pets from a holding pen.

Presumably she is now sans lapins and in ‘the pen’ herself!

I am fond of animals, there is no denying it. In my time I have raised mice and kittens by dropper and taken in stray cats and dogs either as additions to our household or until we could find homes for them. Since becoming a parent nurturing my children and our pets has probably taken on new dimensions. However, rabbits do not have pride of place in my menagerie. I had 2 as a child and they were antisocial, unpleasant creatures that kicked me incessantly. I was quite pleased when they escaped!

Perhaps it is time I profiled the staffies and the moggies in my blog? 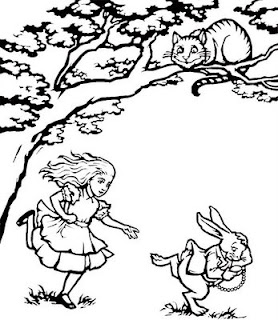 Alice/Miriam trying to self actualise by chasing the white rabbit!
Posted by Alice at 1:18 PM