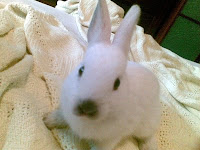 Well, I have finished my assignments but not without life and death drama on my doorstep. The Sunday of the week before last our ginger cat was chasing something small and white around the back yard. It was a baby rabbit ‘about the size of a tennis ball’ (to quote my daughter later). It ran into a clump of fishbone fern and I managed to grab it. Knowing that the people over the road had an adult rabbit we took it over to see if it belonged to them. They told us their rabbit had been missing for many months but the previous afternoon it had emerged from beneath their house with a litter of six! They had deposited two with a pet shop, a friend had taken one and we were welcome to keep the bunny who became know as Lesley/Leslie (as its gender was unknown) for its short 24 hours in our care.

Lesley/Leslie was domiciled in a cat carry basket pending delivery of a rabbit hutch we bought on eBay that night. Lesley/Leslie ate carrots, lettuce, pellets and lucerne and was initially fed water with a dropper but quickly showed him/herself able to manage to drink from a tiny earthen ware dish. By the end of the day Leslie/Lesley had sat on the back of the sofa to watch TV with us and had taken part in a photo shoot on our bed.

Cats are supposed to have nine lives. Not sure about bunnies. Lesley/Leslie survived being let out for exercise before school on Monday morning and was retrieved with the help of our neighbour's (a different neighbour’s) landing net. About 1 pm that day my son called me at work to say he’d let Lesley/Leslie out for more exercise and this time the little mite had darted under the house!

Although we spotted that little rabbit several times that evening our attempts to catch him were in vain. We set the alarm for dawn the next day but when there was no sign of Lesley/Leslie, went back to bed. That gave our ginger cat just the ‘window’ he needed. The first neighbour reports that Simon (not Simone, we know the cat’s gender) chased the bunny till it lay exhausted on the nature strip outside our house & when she went to scoop it up it made one last dash for cover. That’s the last time anyone saw Lesley/Leslie!

We, and especially my daughter, have been experiencing the Five Stages of Grief bunny style:

1. Denial and Isolation – it was her sole crusade to find the bunny and she produced a marvellous ‘LOST’ poster. No-one else’s matched her sense of loss and no other bunny was comparable to the missing one.

2. Anger – her brother’s poor judgement in letting Lesley/Leslie out was bordering on criminal and his lack of contrition or participation in the search deserving of verbal and possibly physical abuse.

3. Bargaining – would my husband and I get home early enough to try to find Lesley/Leslie? Or at least to try to catch a sibling?

4. Depression – she has been very, very sad.

5. Acceptance – we are getting a replacement rabbit this weekend!

helpfully, cause that's the boy scout i am, i sent you the rabbit sexing link, alice. remember, it's not meant for salacious use, and it might be academic anyway because, when you purchase at the store, the pet shop boys will have sorted out the sex lives of their gerbils and gerbil cousins.

Your rabbit sexing site was useful if a touch too graphic for family viewing, Luxcis. Waldorf's gender, perhaps because of his dwarf stature, is readily apparent!