According to Wikipedia the first name of Stieg Larsson, author of 'The Girl With The Dragon Tattoo', 'The Girl Who Palyed With Fire' and 'The Girl Who Kicked a Hornets' Nest'...' crime thriller trilogy, was originally Stig, the standard spelling, but in his early twenties, he changed it to Stieg to avoid confusion with his friend Stig Larsson, who went on to become a well-known author before he did.

Now isn't this an all too convenient story? I contend that it has been fabricated and put about to disguise the writer's actual career move in the years 2003-04 immediately before his purported death from a heart attack.

Larsson's anti right wing activism is well known. He and his partner Eva Gabrielsson were subject to frequent death threats and required police protection. Surely a chance to adopt new identities would be irresistible? And who would be more likely to offer this duo of democracy champions an opportunity to assume those new identities, to 'hide in plain sight' so to speak, than the internationally renowned humanitarian and playful host of Top Gear, Jeremy Clarkson?


My exhaustive research suggests it may very well be so. 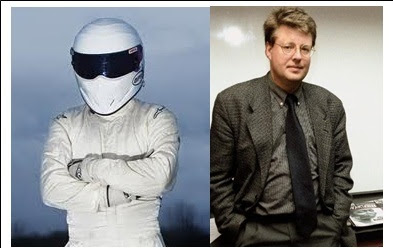 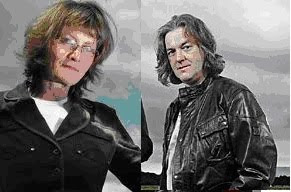 Stig Secrets
Is it possible the crusading Swedish couple have been
morphed into the cast of Top Gear?

In the press at least two famous racing drivers - Perry McCarthy and Ben Collins - have been rumoured to take the role of The Stig in Top Gear. The Stig is a character whose face is never seen and whom Clarkson and his producer allegedly created and named for the nickname given to new boys at their boarding school. There have been law suits threatened when either of these drivers has attempted to take credit for portraying The Stig. But now, how likely is it that Clarkson and his producer, Andy Wilman, would have indulged in teasing and name calling at an English public school? Or that they would think that a silly fictional character from their childhood would even vaguely capture the imaginations of their viewers? Ockham's razor - my explanation is both simpler and more feasible!

While I am asserting that Stig Larsson IS The Stig I am not suggesting that James May and Eva Gabrielsson are actually the same person, just that it has been arranged so that Ms Gabrielsson can slip seamlessly into his spot on the show (thus earning an income and remaining near Larsson). What else can account for May retaining that humiliating and completely outre hairstyle?

The ultimate proof: in a world where celebrities - whatever the source of their fame - constantly rub shoulders on all sorts of occasions (e.g. Naomi Campbell, Nelson Mandela, Liberian President Charles Taylor and Mia Farrow all at the same dinner in 1997), The Stig and Stig Larsson, Eva Gabrielsson and James May have never been photographed together nor are there any recorded witness accounts of their ever being in the same place at the same time!

All the speculations about which professional racing car driver is behind the full face helmet on Top Gear are just (Swedish) red herrings... No wonder the Brits wanted Clarkson for PM, he is a genius!
Posted by Alice at 5:00 PM