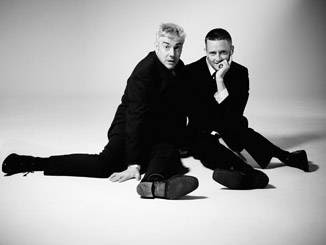 Publicity shot for Good Evening
I grew up with Not Only But Also. Like quite a few other audience members at Shaun Micallef & Stephen Curry's Good Evening, I could mouth the words of most of the sketches along with the performers. I thought they made a sound decision not to imitate Cook and Moore and indeed one of the most successful 'transpositions' was the Art Gallery 'bottoms follow you around the room' sketch which was quintessential 'funny, I thought funny' Pete 'n' Dud in its day and which Shaun and Stephen played as 'pretentious, moi?' Sydney queens to great effect.

However not all of Good Evening was that good. Reviewer Jason Blake in the SMH said it pretty well:

Originality and spontaneity are the lifeblood of live comedy, which might explain why it's hard to find a pulse in this amiable, handsomely staged homage to the wit of Peter Cook and Dudley Moore.

There was a certain clunky, strained quality about much of the program which I think stemmed from the problems inherent in resurrecting the 1960s material of other artists. Moore's Little Miss Britten and '..and the Same to You' Beethoven parodies felt particularly dated. Also, however good a singer and pianist Mark Jones is, he is not Dagenham Dud and it would have behoved Micallef & Curry to use far less of Moore's musical material! The Bedazzled number was particularly overlong and tedious.

A decided success was One Leg Too Few (in which a 'unidexter' auditions for the role of Tarzan) which had already proved its adaptability by having been revived by other comedians in one of the Policemen's Ball fundraiser shows. The interview scenarios (long live Cook's pompous creations of all stripes, especially Sir Arthur Streeb Greebling) and the more situational/physical cabbie sketch also worked very well. 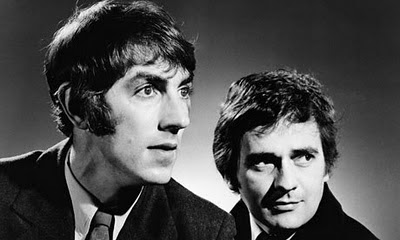 The 'real' Peter Cook and Dudley Moore
I'm glad we went because I am delighted that my kids have seen one* of their comic heroes perform the work of two of mine (and because I caught my 14 year old daughter chatting to Andrew Denton in the foyer praising Hungry Beast - a very proud parental moment for me!) Overall though I think spontaneity and wit are at the very heart of Micallef's comic talent and he is best when he can riff and quip without too many constraints (as he does in Talkin' 'bout Your Generation), or when he has creative control of the whole vehicle (as with the delicious Newstopia). His New Year's Eve special fell quite flat for similar reasons, the guests were just not in his own Dadaist realm.

I am looking forward to Shaun Micallef's future projects - the more autonomous the better I suspect. I will satisfy my appetite for classic Pete 'n' Dud with my 2 vinyl LPs and a CD of the obscene Derek & Clive while occasional viewing of the delightful Not Only But Always teleplay will indulge my need to revere and sentimentalise my childhood memories of this outstandingly clever pair!

* this is not to underrate Stephen Curry whom we had only seen before in the Graham Kennedy biopic. He acquitted himself brilliantly in that and was a complete match for Shaun in Good Evening!
Posted by Alice at 4:49 PM

Doug, in The Guide from last Monday's SMH, mentioned he'd obtained a copy of Behind The Fridge, a televised version of the show Pete and Dud brought to Australia in the early 70s and which I saw at the wonderful old Metro Theatre in Kings Cross. As there's so little remaining of Not Only But Also, it'd be great to get hold of this. I should give Doug a call.

Yes, please do. It would be wonderful to see it.